skip to main | skip to sidebar

Putting the cat down 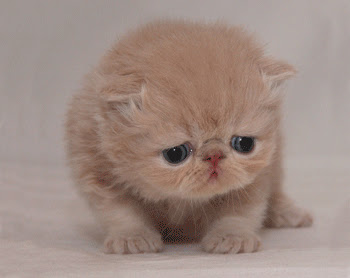 I had to put my cat down today.....I know....But Im not sad, know why? Because the fucker diserved it! The people whom i call my friends....they thrust cats in my face, then chortle as i show my disgust. NO MORE! The cat that has haunted me so has shown itself in physical form in eve and it threatened my very credibility and existance. After so much talk, how could i not face this beast? It started at jests and jokes and now here it was, the very cat that came to being to confront me. Witness the opening moments before our epic clash.
Renaultar > Is that a cat?
Korenav's Cat > MEOW!!!!111oneone!!!
Renaultar > Wow....such an annoying cat....
Renaultar > I think i know where your owner is.
Korenav's Cat > O.O
Korenav > YOU!
Korenav > YOU sun of a bitch!
Korenav > Its the shoe box for you in an early grave!
Its velator grinned at me, a stupid grin that i would melt right off it with my pulse lasers. It could not exist any longer. This was the bane of my existence and i would go through hell to see it vented into the empty void of space. Its meows were squealed and soon silent as nothing but a ruin of a ship and corpse were all that was left. I made sure to display the trophy to my fellow alliance and that cats would not be tolerated.
Korenav > Corpse Female
Renaultar > Dear god....
Iron Phenix > gf
You shall mock me no more cat! Some day i shall return to your home system where you began to degrade it into a hive of broken villainy!
The deed was done and hopefully never again.
-----------------------------
Now that the serious drama is over with, lets move on. Wait, whats that? Was that real? Of course it was! Some dick in my corp thought it would be funny to make an alt character to terrorize me. Lets talk about people or are NOT dicks, like me!
I attempted to dual box for once, as in use both my main and alt in pvp at the same time. Gotta say, its a bit of work. Probably should have paid attention to my alt more for his scout services than just being another grunt. Yeah, i lost a harbinger....and a curse....so what?
Oh, and about that, yeah, i got a curse and i love it....did love it. Funny how that happen. Had my main in my curse sitting off grid from a gate that lead to low sec while my alt was on the gate camping in a cane. When another cane jumped through, i was thrilled to have the chance to kill it. Understand my disappointment when it warped before i could lock, and my even larger disappointment when it landed on my curse.....
My throught process was kinda scrambled. One worrying over my alt getting his cane in gear to rescue me, the other was my curse trying to gtfo. Sounds exciting to some perhaps, but take my word for it. It really sucks....
Anyhow, my cane arrived just as my curse popped. Now you would think an epic battle for vengence would occur here. Nope. He warped off. Again. Fail alt. In all seriousness though, i gotta say the guy played his cards very well and smoothly too. Hats off.
I got some thanks to give. Big thanks. After my loss i reluctantly announced my loss of my curse to my alpha buddies (i literally had this ship for less than 2 days) and i want to put in a very big thanks to my friend Jess whom was looking for a chance to duel with me in his balaghorn(crazy fuck) and covered the loss of the ship for me. I gotta say i owe him one. Im really hoping to make the curse useful and gotta thank him. So Jess, i owe you one.

This post is dedicated to the memory of all those that have died in Jita bombings....
Posted by Korenav at 10:48 PM No comments:

No, it doesn't mean i am occupied in eve. RL things just need to be done and they can actually directly hinder any reasonable time on eve. But thats not what I'm going to blog about, otherwise this would be the 'whiny RL issues' blog. And we have plenty of those to go around already.

So I'm working on getting my first capital ship. Im very excited about it, but at the same time this has brought me several new issues that need addressing. First is making more isk. I never loved spending lots of time carebearing to the point of feeling 'comfortable' on a cushion of isk. I like to work to the amount I need then get going. As a result, i have only a handful of ships and are not spread around. It feels wasteful to me to have several of one ship if it isn't useful immediately.

My other issue was choosing between going for a carrier or a dread first. While the dread was closer skill wise and suited my gunnery, i went for carrier for its more support/logistical role and cost. I'm not ready to sink nearly 2 bil into one ship that is only useful for shooting other caps in large lag fights. Carriers would pay off more for me both immediately and in the long run.

Since training for a carrier will take me a bit longer, and i have been feeling a bit bland on ships lately, i finally trained up stealth bombers on my main. I have yet to take it out for a spin but while at it i figured i should train up recons. I have been looking at the curse a lot and it seems like a nice add on to small gangs. Would certainly be a nice change up on a small gang roam ship from my signature harby. If anyone has any recommendations on small gang, even solo, fits and tactics on a curse please share them. I have no experience with recons at all.

Anyhow, i was chatting up with my alpha corp buddies in MV when they mentioned the whole Evoke attacks on us and all. Curiose as to their changing political situation, one of them asked me what was going on. I unfortunately didnt have an answer, but i was surprised when i shouldnt have been when they replied 'Wow, you usually know that stuff.'

At hearing that i felt a bit of a spark. I don't like being just some typical grunt. I like to be a bit more useful. The best part of eve for me was helping newbs in our training corp, making sure people were doing good enough and seeing that we got as many as we could to make the cut to the command corp (I had started out a newb too in this corp and worked my way up to director in the command corp, the corp all the 'graduated' members in the newb corp would go to for null). Ever since the two collapsed, i have been looking for something to do that isn't just grunt work. Why not be a reporter? Or a political advisor (like that would happen soon...), or a diplomat (ditto). Problem is, not really sure how one can do that in a sea of grunts. Ill find a way. Until then, i gotta keep up on my knowledge if i'm to be useful. Any blogs relevant to that please chime in.

PS- Yes i know, nothing too humorous as i usually plan it, but i am tired and short on material. I have to do something crazy soon. I put in pictures so it looks a bit shinier.
Posted by Korenav at 10:34 PM No comments: